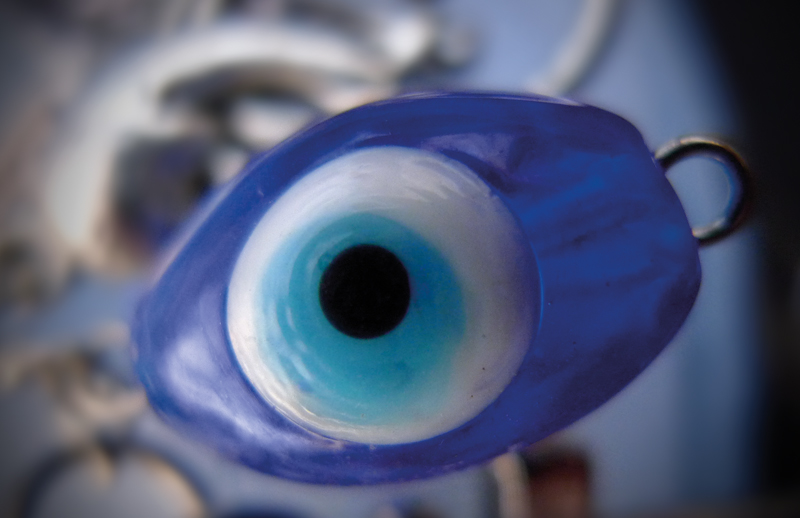 Once you start paying attention to Bulgarians, you will observe some inexplicable actions. Dozens of men and women wear red thread around their wrists. An old woman cuddles a baby, and then spits at it. Another woman panics at the thought of putting her bag on the floor. On TV, Prime Minister Boyko Borisov wears a red thread around his wrist, and says that he never clips his nails, shaves or lends money… on a Monday. A book of self-proclaimed Bulgarian traditional magic for health, good luck, love and so on is a bestseller.

In 21st century Bulgaria, old superstitions thrive, mixed with beliefs in the supernatural, the extraterrestrial and everything mysterious or conspiratorial.

A recent poll has put this reality into a statistical perspective.

One might ask, after reading this, are not (the majority of) Bulgarians traditional Eastern Orthodox Christians? Well, yes and no. While this nation adopted Christianity as early as 864 and considers it a pillar of its national identity, in reality superstition never disappeared from everyday life. It even survived Communism, a regime that was deliberately atheistic and materialistic. Under Communism, superstition filled the gap left after official religious life was restricted. In the turbulent post-1989 times it provided Bulgarians with a safety net of belief in a  world of many choices, one they had not been used to. With Bulgaria opening up to the broader world foreign superstitions arrived, such as the belief in extraterrestrials trying to contact the Bulgarians via some self-proclaimed psychic based, say, in Novi Pazar.

Guarding oneself against the evil eye is a superstition as old as the first humans living in what is now Bulgaria. Archaeological record shows that, as peoples and gods changed, the belief in magical objects, amulets and practices providing protection from evil stood their ground. It remains so, as is evident by the abundance of red threads around Bulgarian wrists (do not confuse them with the Martenitsa, which is a spring thing) and blue beads hanging in homes and cars, on necklaces and bracelets. Sometimes these are dipped in holy water, for extra protection. It is not as strange as it might seem: churches and monasteries often sell their own good-luck charms, only these are adorned with icons.

Wearing an amulet is not the only way for one to avoid the evil eye in Bulgaria. Spitting at someone you find adorable, usually a baby or a toddler, is believed to do the same job, as does touching wood when you want to prevent something bad from happening.

Even with all these protective measures, however, the power of the evil eye remains strong, often provoked by the envy or bad aura of a blue-eyed person. When someone falls a victim to such a jinx, they should wash their eyes with holy water or with water that was filtered through a broom. Brooms are big in Bulgarian superstition. It is believed that if you sweep at someone's feet that person will never marry, and that if you sit on a broom, you will get a boil on your bum.

Why Bulgarians believe that putting your bag on the floor will render you penniless remains a mystery.

Magicians, clairvoyants and healers have always had their place in Bulgarian society. They were so prominent in the 19th century that their activities were strongly condemned and portrayed as the work of the Devil in church frescoes.

As the above mentioned poll shows, however, this church-initiated propaganda did not work. Moreover, in the 1980s, while still under Communism, the belief in healers and clairvoyants took on a modern twist. Believe it or not, it was then that Soviet psychics who claimed to have the power to heal from a distance appeared on Bulgarian TV screens. When Communism collapsed, hordes of local healers and psychics appeared, most often on local cable networks, claiming to "help" anyone who was desperate enough to call the very expensive premium line.

A particular type of healer is the Hodzha, a person who claims to be a Muslim cleric and who is believed to be able to predict the future, break particularly strong jinxes and black magic, and heal.

Vanga, the blind woman from Petrich (1911-1996), is the capo of clairvoyants in Bulgaria, a point of reference for anyone claiming some supernatural powers (if we had been given a buck every time a psychic was proclaimed the "New Vanga" we would have been able to take early retirement). People started to flock to Vanga for advice and to communicate with their dead relatives as early as the Second World War. Vanga's fame only grew under Communism, when she was appointed as a paid clairvoyant by the Bulgarian Academy of Sciences and was consulted by the party elite, including Lyudmila Zhivkova, the daughter of Communist dictator Todor Zhivkov. After 1989, her fame skyrocketed, spread by the now free media, and so did the queues of people seeking her help. When she died, thousands of people, the then president included, attended her funeral.

Ever since, the cult of Vanga and the belief that she could predict the future, speak with the dead and heal using natural ingredients, has only grown, helped by never-ending new prophesies attributed to her by people who claim to have been close to her. Vanga's international fame is particularly big in Russia, probably because she – or people who claim to be close to her – consistently predicted that Russia would rule the world. In the past couple of years, however, Western tabloids have taken a fancy to Baba Vanga, too, particularly during events like the war in Syria.

The fact that Vanga had long predicted that the Third World War will start in Syria is indeed chilling. We can only hope that she was wrong about Russia.

At the end of the 20th and the beginning of the 21st centuries, helped by new technology and more contact with tin hats across the world, Bulgarians adopted a number of imported beliefs and superstitions. Telepathic contact with extraterrestrials was all the rage in the 1990s, exemplified by an event that unfolded in 1995. In that summer, some psychics claimed that they had been contacted by an alien race. The extraterrestrials, led by none lesser than their president, were eager to come and "save" Bulgaria. They would arrive, the psychics claimed, at Ruse Airport. On the scheduled date, 11 September 1995, thousands of Bulgarians gathered at the airport, with many more watching live on TV. Hours passed, and the crowd grew restless, but the spacecraft did not materialise. It was all the Bulgarians' fault, the psychics claimed, before being rescued from the angry crowd. The aliens were disappointed that the Bulgarian head-of-state was not there to meet them.

You do not need to be concerned by this globalisation of superstition, however. Bulgarians will only allow their red threads to be removed from their cold, dead hands.

DECIPHERING BISHOP'S BASILICA OF PHILIPPOPOLIS
This May, for two days, historians, archaeologists, restorers and experts in other fields shared their findings and ideas about the Bishop's Basilica of Philippopolis at a scientific conference in Plovdiv.
FOR A COUPLE OF LIONS' HIDES
Under GERB, Bulgaria's public has become accustomed to scandals of various magnitude that come and go about every second day, sometimes several times a day.