WALKING THROUGH FOREST OF STONE | VAGABOND Skip to main content

WALKING THROUGH FOREST OF STONE

Lesbos Geopark takes you back millions of years 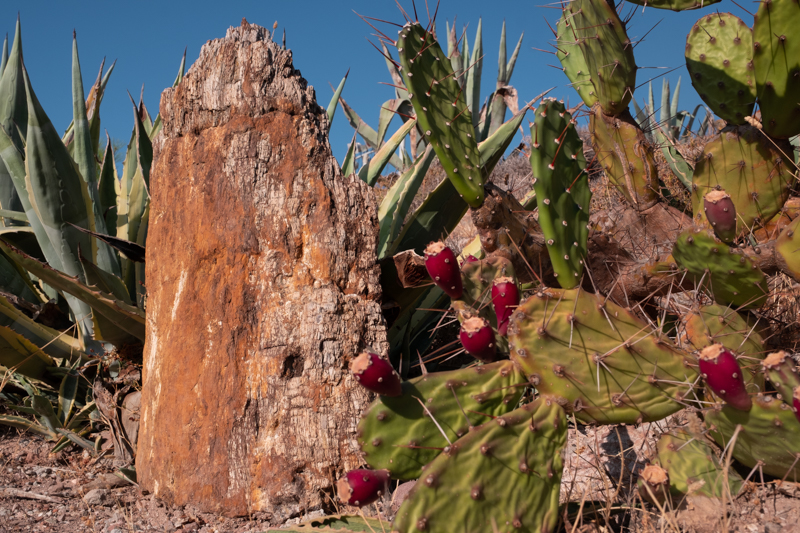 T-Rexes and diplodocs, pterodactyls and megalodons. These are the first things we usually think of when contemplating the distant past of our Earth, of the times when strange creatures roamed continents and oceans that are now only a distant geological memory. Fascinated by these giants of the past, we often miss the larger picture. These animals did not live in a vacuum. They inhabited an environment dominated by plants that they used for food and shelter. Unlike animals, whose rapidly (geologically speaking) changing environment forced them to evolve relatively quickly, plants changed less dramatically over the passage of millions of years.

There is a place where you can visit to immerse yourself in a petrified prehistoric forest that existed about 18 million years ago, after the dinosaurs disappeared but before humans emerged.

This place is the Greek island of Lesbos, the home of the Petrified Forest Geopark. 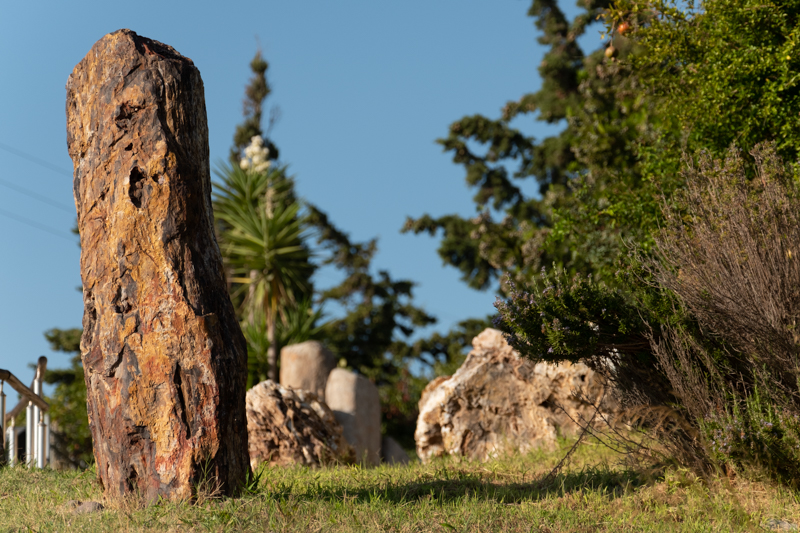 Ancient Greeks left the first written accounts of Lesbos' fossilised forests. Their explanation? The trees were petrified by Medusa, the mythical snake-haired monster whose gaze turned all to stone

Famed as the birthplace of the poetess Sappho and as the centre of the production of ouzo aniseed liquor, Lesbos is the third largest island of Greece. Located just off the coast of Turkey, most of it is covered with low forests. The local community grows olives, aniseed, figs, grapes and pistachios. However, 18 million years ago Lesbos was a different place.

First of all, there was neither a Lesbos Island, nor an Aegean Sea. A landmass covered with lush subtropical forests of giant sequoias and pines, oaks and laurels, palms and gingkoes existed in their place, inhabited by giant deinotherium (a predecessor of modern elephant) and insects that ate bark or leaves. There were also volcanoes; they are the reason why the prehistoric forest survives today.

As so many acts of creation, it started with destruction. The violent eruptions of volcanoes covered the western part of what would become Lesbos Island with a thick layer of ash. Then rains, caused by the outpouring of volcanic gases into the atmosphere, saturated the devastation, creating mudslides over the fallen trees. This layer isolated the buried plants from oxygen and hence stopped the process of decomposition. Encased in mud, the trees – some of them fallen, others still standing, started to fossilise. The conditions were so perfect that today the bark, trunks, roots, branches, twigs and cones and insect tunnels dug in the wood are amazingly well preserved. Even leaves are visible as imprints of long-gone foliage in the rock. 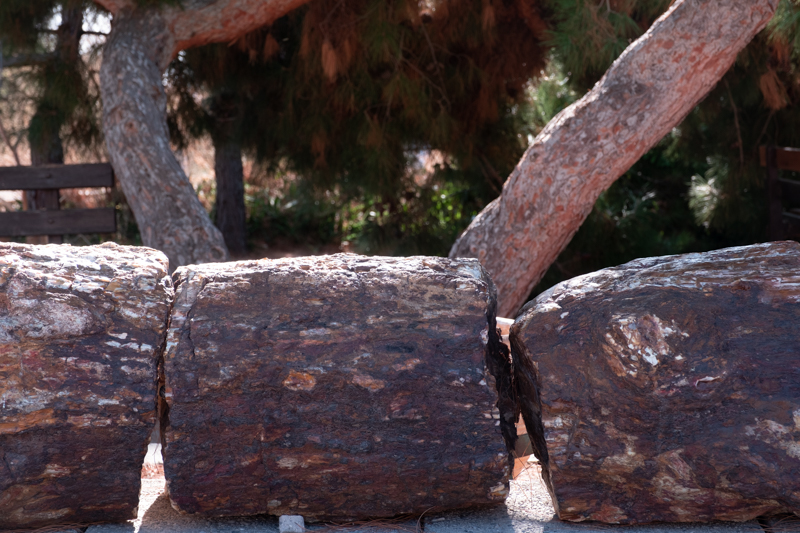 While the prehistoric forest was in the slow process of fossilisation underground, the landscape above ground was changing. The constant movement of the African tectonic plate under the Eurasian one, which had fed the volcanoes, changed its angle. Eruptions stopped. The Aegean Sea and its islands appeared in the place of the former landmass. The climate became drier and colder, and shrubs started to grow where the tropical forest once thrived. Erosion took over on the barren slopes of western Lesbos. Gradually, the long buried petrified forest emerged from the rocks.

By the 4th century BC its remains impressed Theophrastus, a local scientist who wrote the first botanical book in history. Even at this early age, he correctly suggested that the petrified trees were once living organisms.

More that two millennia later, the modern visitor can explore the remains of a forest that existed about 18 million years ago. Established in 1994, the Lesbos Geopark is the second largest in the world, after the one in Arizona. Its museum in Sigri has an enlightening exhibition dedicated to the geological past of the region and the Earth. Specifically designated areas allow you to walk among giant prehistoric trees still standing or lying where they were buried by the volcanic ash, a plant-version of Pompeii. While the main fossil site is closed to visitors for rehabilitation, the petrified trees around the museum and on the Plaka peninsula are open, and more trunks are exhibited by the newly widened main road to Mytilene. Weather permitting, a guided tour takes visitors to Nissioti Isle to explore petrified trunks both on the ground and in the water.

A window to the past when humans did not exist, the Petrified Forest in Lesbos is a quiet reminder of the changes that our planet has undergone, a memento of the times when it was so different to today. 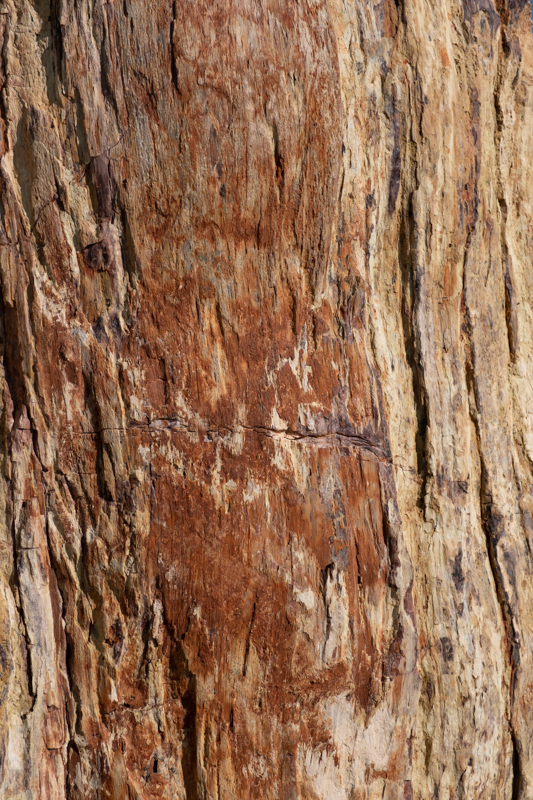 Tree trunks have been preserved to astonishing details, including damage from wood-eating insects, tree-rings and even cell structure. The latter allows scientists to identify the different species which used to live in the prehistoric forest

When travelling in western Lesbos, one often encounters the odd petrified tree 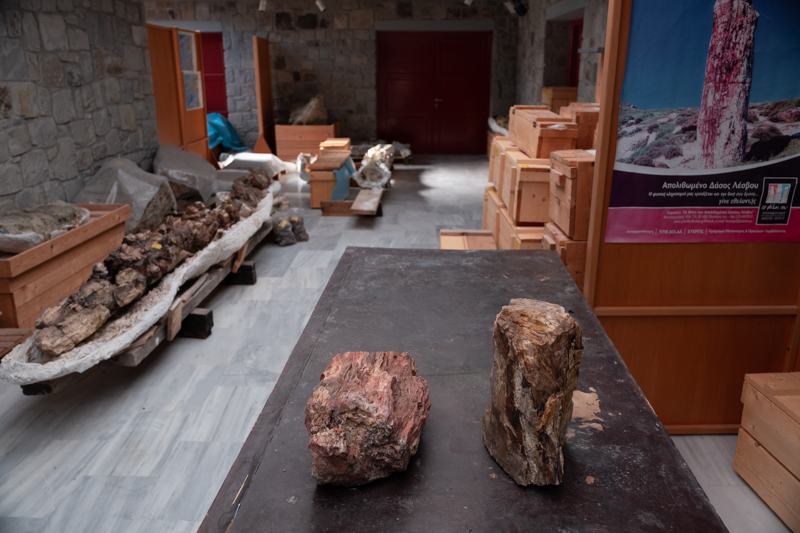