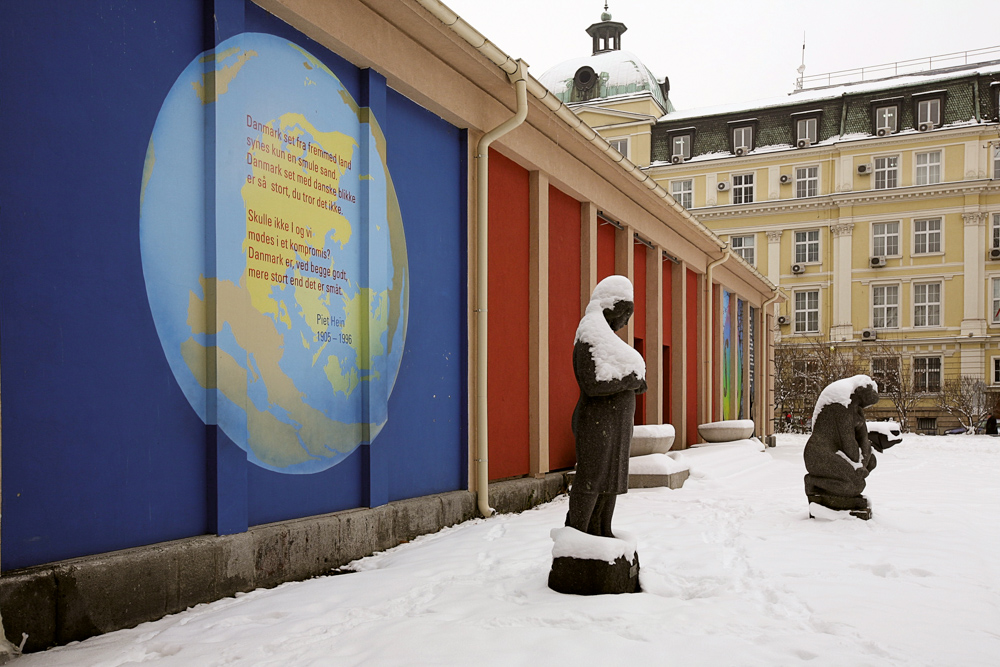 A poet, scientist, designer, mathematician and inventor, Piet Hein (1905 – 1996) is among the most famous Danes, along with Niels Bohr and Karen Blixen. He studied at the Royal Swedish Academy of Fine Arts in Stockholm and philosophy and theoretical physics at the University of Copenhagen. In the 1930s, he began publishing short aphoristic poems which made topical comments in the Politiken daily. Twenty volumes of these poems, called "grooks" and signed with the pseudonym of Kumbell, have been published in Denmark and translated into many different languages. Hein was also a talented designer: he created a harmonic figure, the "superellipse," which is used in furniture and container designs and even in town planning in many countries worldwide. The 3D version of the "superellipse" became a "superegg," which also found practical application – in the design of various board games, anti-stress balls and even drink coolers.

Here is how he explained his working method: "Art is a solution to problems which cannot be formulated clearly before they have been solved." Hein was a universalist who, like the scholars of the Renaissance, successfully combined art and science.

Denmark seen from a foreign land
looks but like a grain of sand.
Denmark as we Danes conceive it
is so big you won't believe it.

Why not let us compromise
about Denmark's proper size?
Which will truly please us all
since it's greater than it's small. 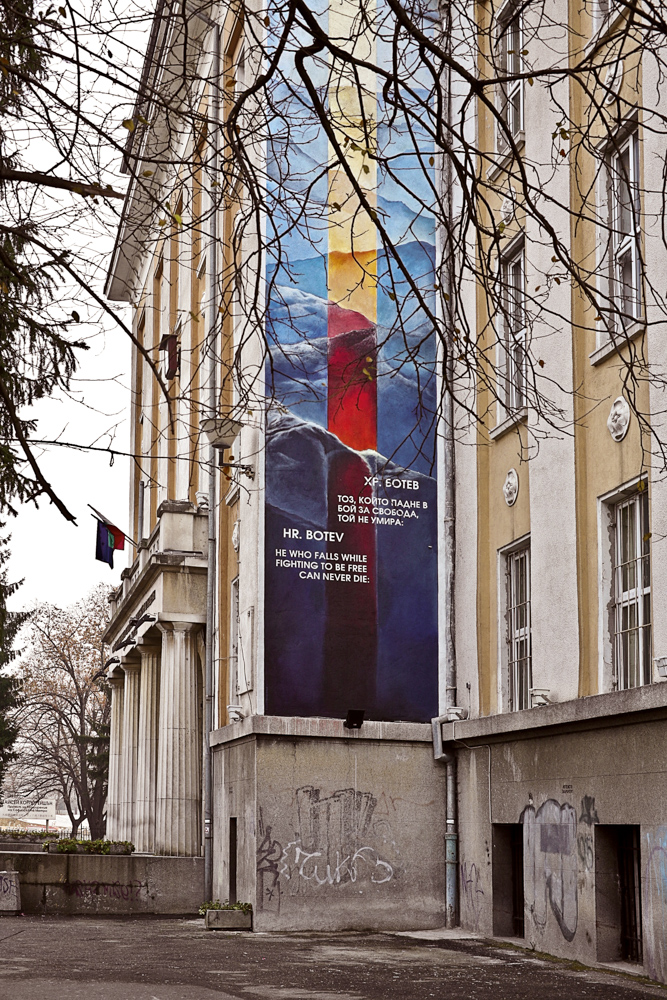 A poet, journalist, translator and literary critic, but also a revolutionary and thinker, Hristo Botev was born on 6 January 1848 in Kalofer. He studied in Odessa and was a teacher in Bessarabia. Then he returned to his native town for a short time before emmigrating to Romania. There he began to write and translate and worked as a printer and a teacher. He acted in theatre plays and edited the émigré newspapers Duma na balgarskite emigranti, or Words of the Bulgarian Emmigrants, Svoboda, or Liberty, and Nezavisimost, or Independence. Botev published the satirical paper Budilnik, or Alarm Clock; and wrote the Zname, or Banner, and Nova Balgariya, or New Bulgaria, papers.

In 1875, with Stefan Stambolov, he published a book of poetry entitled Songs and Poems. He was the author of only a small number of poems, feuilletons, satirical pieces and prose.

After the beginning of the April Uprising, he organised a cheta, or band, of armed men to help the insurgents, took over the Austrian steamer Radetzky and landed on Bulgarian soil near Kozloduy. The band received no support from the local people and fought some hard battles, in one of which Botev was killed.

He who falls
while fighting to be free,
can never die. 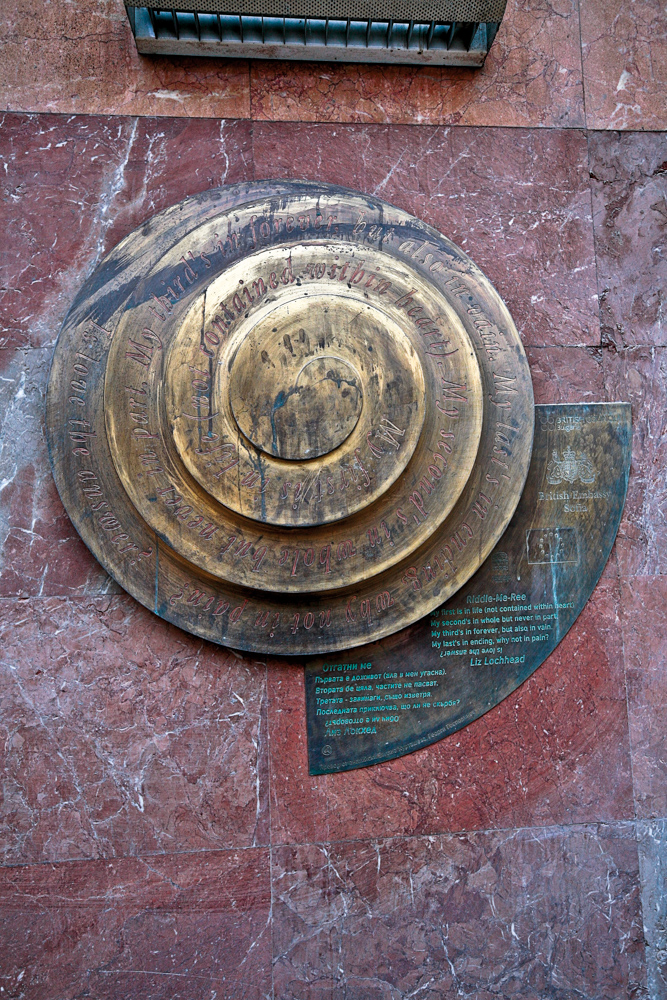 Scottish poet and playwright Liz Lochhead was born in 1947, in Lanarkshire. She studied at the Glasgow School of Art and initially wanted to become an artist, not a writer. She taught art at schools in Glasgow and Bristol until she won a Scottish Writers Exchange Fellowship in 1978 and went to Canada for a year, where she wrote her first play. Her first collection of poems, Memo for Spring (1972), as well as Dreaming Frankenstein (1984) have won the Scottish Arts Council Book Award.

She has other accolades too. Her work for the theatre, Perfect Days, a romantic comedy, first performed at the Edinburgh festival in 1998, has resulted in a long-standing interest in this art. Despite the fact that she is not very keen on teaching, she is also a successful lecturer of creative writing. Liz Lochhead lives in Glasgow. In 2001 she visited Bulgaria as a participant in a Bulgarian-Scottish literary festival.

My first is in life (not contained within heart)
My second's in whole but never in part.
My third's in forever, but also in vain.
My last's in ending, why not in pain?
Is ‘love' the answer? 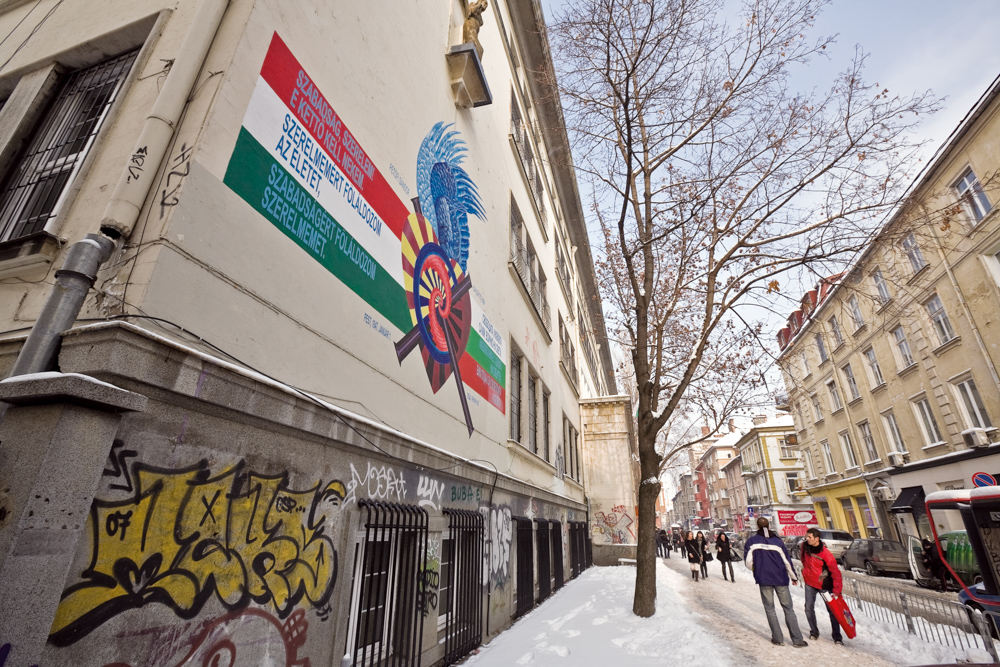 The poet Sándor Petőfi is a symbol of Hungarian independence. He was born Alexander Petrovics in 1823, since Serbian and Slovak blood also flowed in his veins. Forced to cut short his education due to his father's bankruptcy, Petőfi held jobs in various theatres in Pest, taught and worked for a newspaper. In 1844 his first book of poetry was published in Pest. Petőfi joined a circle of radical students and intellectuals.

In 1848 he led the Hungarian revolution and continued to write poems and articles. In 1849 he took part in battles against Hapsburg forces and is thought to have died in the fighting. Other hypotheses suggest he was captured and taken to Russia, where he later died. Petőfi's poetry draws inspiration from folklore, while patriotism, love and praise of nature are among his main themes.

Freedom, Love!
These two I need
For my love
I sacrifice life
For freedom
I sacrifice my love.

IN SEARCH OF EMPTIED TIME
1 I remember her bloody, drained, and happy, her thighs trembling from exertion, spread open to the sides. And I'm holding a piece of living flesh in my hands and trembling with fear.
BEAR BOY
"Can I get you anything else, Bear Boy?" inquired the waiter of the neighborhood hole-in-the-wall café with an ill-contained smirk.
REGIME CHANGE, An excerpt
The white Renault parked in front of the House of the Communist Party. The chauffeur rolled down the window to have a smoke. Dimcho took a few moments sitting quietly in the back seat.
THE WRITER AS SPY
I have a story in which the main character is a voyeur. It is called The Red Room. Every few months this guy rents a new place to stay in search of more and more new scenes for observation.
RAKIYA, a short story
Comparisons of rakiya and other spirits are nothing new in Bulgaria – one such competition takes place annually in Sofia – but those contests consider alcoholic drinks mass-produced by established wineries and corporations.
RED TIDE
To defrost from a long Arctic Vortex and to draw mangroves in charcoal I flew to an artist colony near Fort Myers, Florida, on an elongated and thin island, a Key.
ALONE TOGETHER
We're in the time of COVID-19, and I'm in the southernmost country in the world, save for New Zealand and Antarctica.
THE SHAPES WE TWIST INTO
I've been to Bulgaria twice, separated by a gap of three years, though it feels like I've actually been to two different Bulgarias. This difference is on my mind as I think of how my home country, America, has changed in about the same timeframe.
DESCENDING EVEREST, An excerpt from a novel
Mt. Everest, April 2011
BEING HAPPY
The White Gentleman decided that the weather was too beautiful this morning to waste the day in everyday nonsense. Therefore, he put on his happy hat and flung the door open with a flourish.
SAN SALVADOR
If somebody's heart stops due to a trauma, such as a car accident or a fall, CPR cannot save them. I know this, but I don't know if it is the same with cycling.
THE BOY, BORN FROM AN APPLE
Once upon a time, a husband and a wife lived in a town. They were very rich, but had no children. They were very sad about this.