Ishak Pasha built his home by a road. The Silk Road 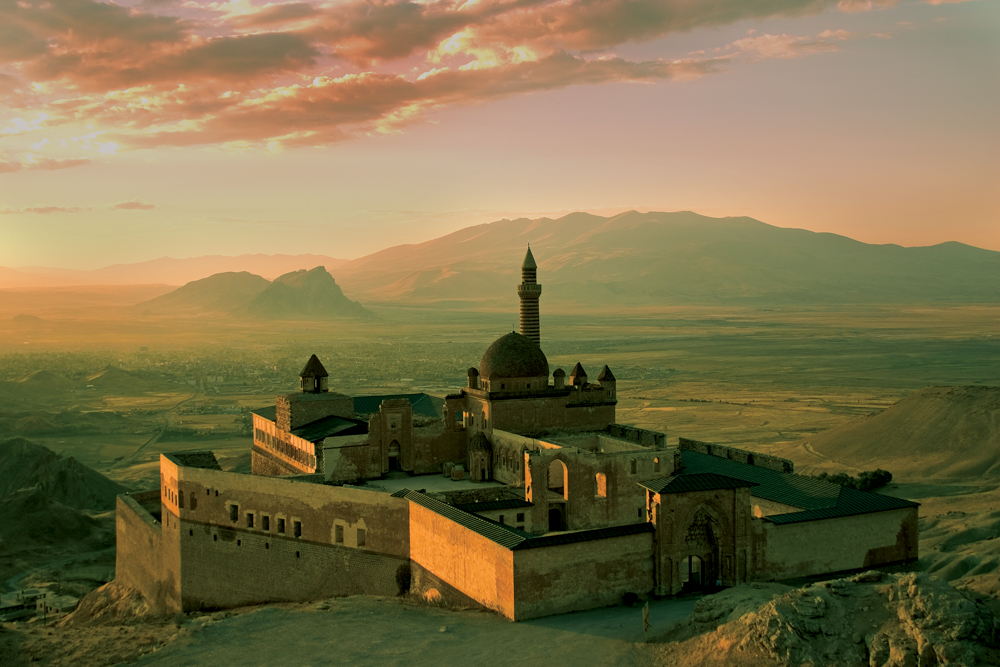 In 1784, Kurdish warlord Ishak Pasha chose a high plateau on the side of the mythical Mount Ararat in present-day eastern Turkey as the location for his palace. The site had a great strategic significance; the Silk Road passed through the valley below, and Ishak Pasha collected the tolls.

With no expense spared, Pasha invested all his money in the construction of a magnificent palace, the like of which had never been seen before. When this masterpiece of architecture was finished he had the architect's head cut off - this was an old tradition to ensure that there would never be another such palace in the world.

The exclusive rights over the palace architecture thus acquired remained intact until 1917. They were then, rather unceremoniously, violated by Russian soldiers, who wrenched the huge palace gates off their hinges and transported them all the way to St Petersburg. Today the gilded and richly ornate gates guard the main entrance to one of the greatest museums in the world: the Hermitage. 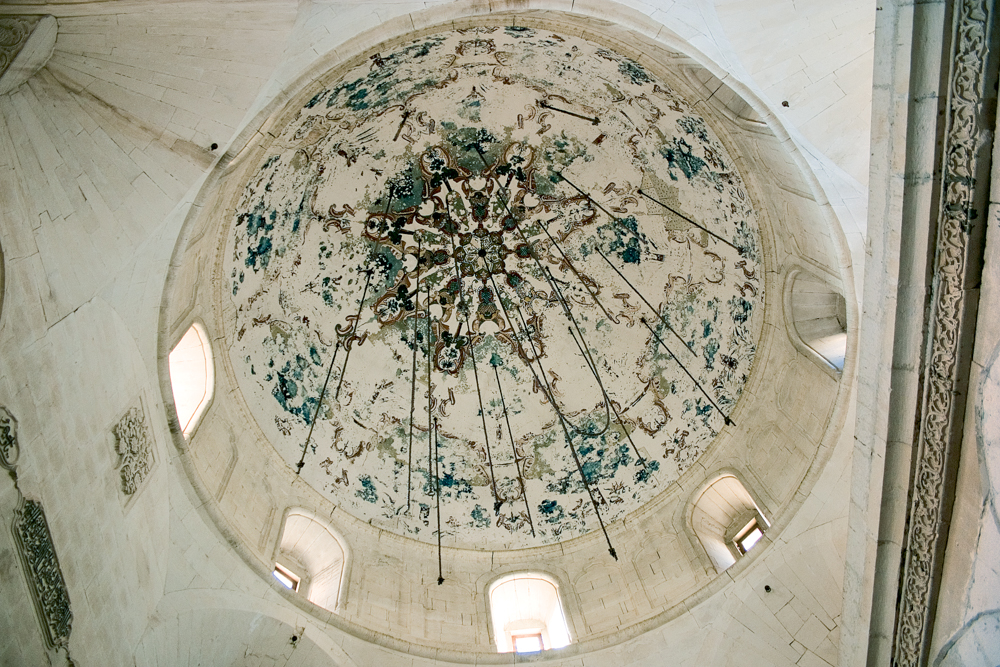 But Pasha's lavish spending had not been in vain and the rest of the palace remained, resting on its smooth perch scooped out of the rocky mountainside. Its 336 rooms were all equipped with what were the hitherto unknown luxuries of central heating, running water, and a proper sewage system.

This decadence was not confined to the rooms. There was an exquisite mosque, a mausoleum, a library, and two reception halls with richly ornamented facades, doorways, and interiors - everything was designed in an incredible mixture of styles. If we apply Schelling's notion of architecture as frozen music, Ishak Pasha's Palace would have been a beautiful yet almost inconceivable polyphonic piece in which Georgian and Armenian vocals blended with the Turkish tamboura and the Persian zither.

The interior structure of the mosque is a combination of the elongated vertical spaces of Armenian churches and the elaborate, yet subtle, almost transparent decoration of typical Seljuk motifs. The Persian infl uence is apparent in the bas-reliefs on the mausoleum in the courtyard. A peculiar mixture of Georgian, Armenian, and Seljuk aesthetics oozes from the splendid dining hall in the harem section. Owing to the positioning of the rooms around the courtyards and the style of some of its decoration, the palace is considered to be the last monumental building of the Lale Devri or Tulip Period of the Ottoman Empire. 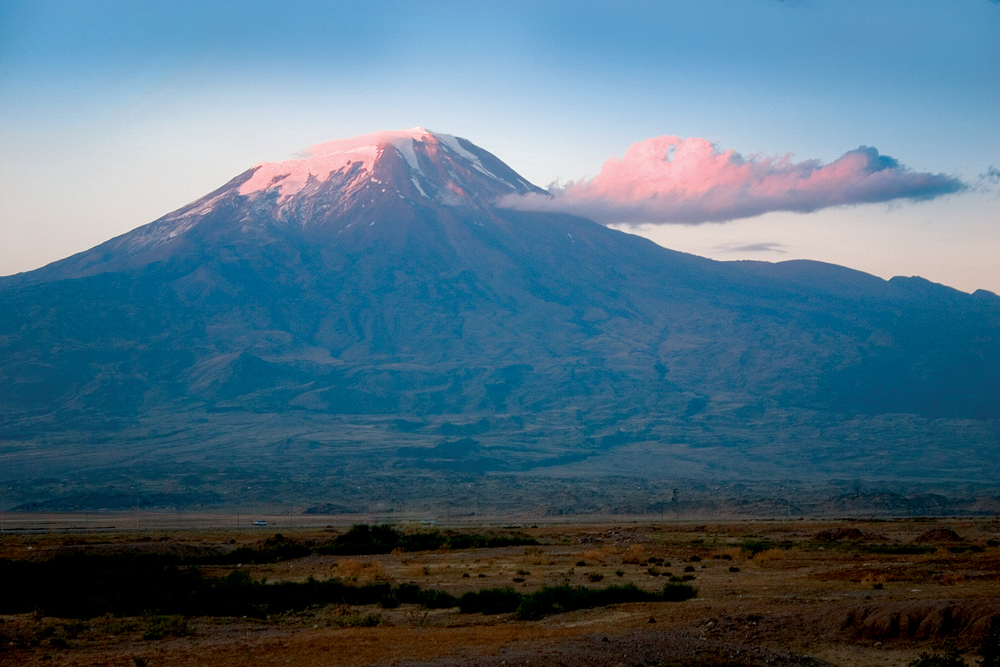 As the poet said, Ishak Pasha Palace boasts the toilet with the best view in the world

Even today, Ishak Pasha's Palace astonishes with its meticulous attention to detail.

A small but curious fact is that the palace can probably claim the title of "The Toilet With the Most Fantastic View in the World". From the window of the small, ancient room you can see the whole valley of Dogubayazt, the last Turkish town before the border with Iran.

The palace also offers all mod cons for daily life, including some that modern architecture has deprived us of. Among the excellent ideas are the dungeon and the stables, which you reach from the first courtyard, as well as the Turkish bath and the spacious kitchen, which obviously saw a lot of use, judging by its smoke-tinged walls.

The three most beautiful places in the palace, and those that probably formed the hub of its social life, are the dining hall in the harem section, the mosque, and the library, all indisputably architectural masterpieces. 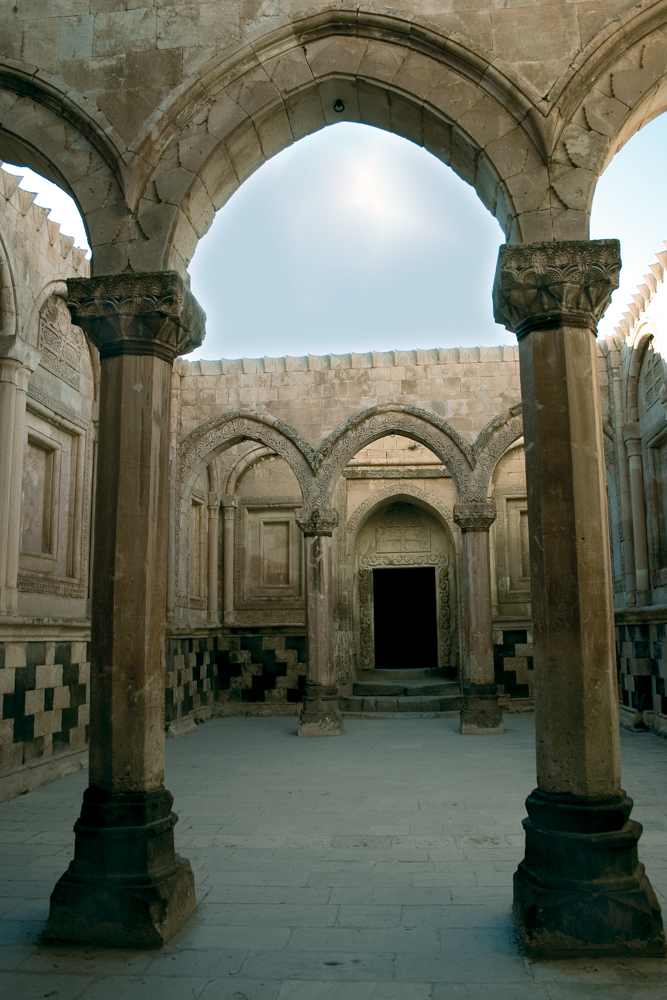 The women in Ishak Pasha's harem dined in a large, elegant hall, encircled by a colonnade with Georgian-style decoration. A strip of black and white stone slabs in the lower part of the room reveals a Seljuk hand. Three real and eleven blind windows surround the upper part of the hall, embedded in dramatically carved arches.

Despite being bare and ravaged by time, the hall still evokes a festive mood. You can imagine the pleasure with which the Kurdish lord's Kurdish girls watch the sun set from the foot of Ararat concubines devoured the food on the lavishly laid tables. The luxury which Ishak Pasha provided them with indicates that they had some influence in society, or at least on his heart.

A careful reading of historical sources reveals that the popular modern view of women in Ottoman harems as luxurious slaves is quite wrong. Not only did they have great power, they also lived fairly emancipated lives and we can assume that this was also true of Ishak Pasha's wives. Although their castle today is in the middle of nowhere, two centuries ago it was the centre of an ancient, bustling city.

Elaborate ornamentation adorns almost every square inch of the palace

Unfortunately, the rest of the buildings have been destroyed by earthquakes. The town of Do?gubayaz?t was built in the early 20th Century at the foot of the plateau to house a large military base.

The few remnants of the ancient city that was built around the palace are the mausoleum of Kurdish writer Ahmed Hani (18th Century), a mosque from the time of Selim I (early 16th Century) and the ruins of a fort which supposedly dates from between the 8th and 2nd centuries BC. This accumulation of fragments belonging to different worlds is one of the charming features of present-day Turkey.

Today, only a few of the visitors to St Petersburg's Hermitage know about the origin of the splendid gilded gates at the entrance. One reason for this is the way in which they blend in with the Baroque architecture of the museum. Although they have been transported a thousand miles northwest, they do not appear to be Eastern. Instead, they could pass as an example of European influence on Russia, and remind us just how closely linked Europe and Asia have been in the past.