FROM WHENCE THE KAMCHIYA SPRINGS

How to define the source of a river is often a tough question to answer. Is it where water springs from the ground for the first time, or is it the place where two or more streams merge into a larger flow? Even the source of the Danube, Europe's largest river, is contentious: at least three springs claim to be the beginnings of the mighty river.

The Kamchiya River is no exception. Theoretically, it is only 46 kilometres long and flows through northeastern Bulgaria, before joining the Black Sea at a particularly beautiful and terrifyingly mosquito-infested forest. With its major tributary, the Golyama, or Grand, Kamchiya, the river is 244 kilometres long, making it the 8th longest river in Bulgaria. The official source of the Golyama Kamchiya – and of the Kamchiya – is in the Lisa Planina, at an altitude of about 710 metres above sea level.

But there is a spot high up in the Stara Planina, on the border of its central and eastern parts, which has gained popularity as the true source of the Kamchiya. It is where the second major tributary of the river, confusingly called the Luda, or Crazy, Kamchiya springs up as a tiny stream, runs eastwards for 200 kilometres and joins the Golyama Kamchiya. The Luda Kamchiya is the 10th longest river in Bulgaria. 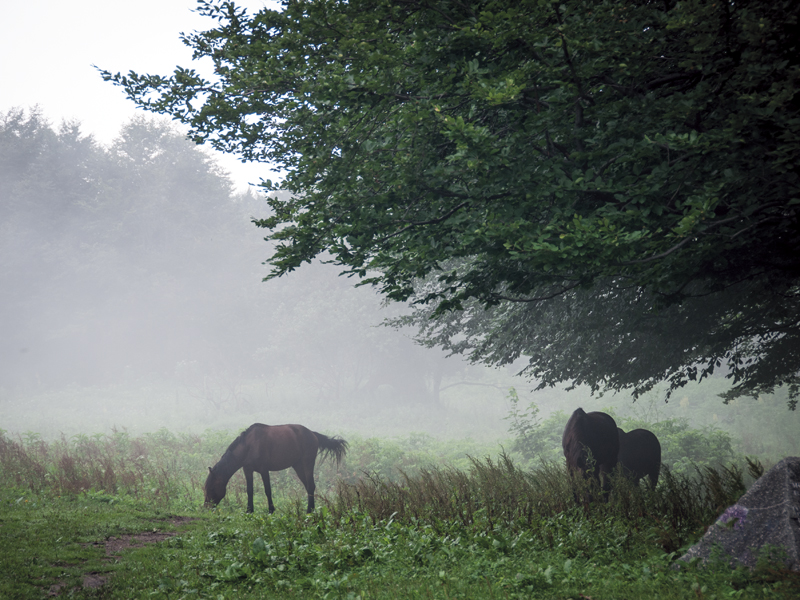 The popularity of the Luda Kamchiya's spring as the genuine beginning of the Kamchiya River (are you already confused?) is probably due to its location. It is in a pleasant and historically significant spot, the Vratnik Pass connecting Veliko Tarnovo and Elena to the north with Sliven south of the Stara Planina.

Situated at an altitude of 1,097 metres above sea level and being 10 kilometres long, the Vratnik Pass used to be a main route through the mountain. The Romans built a road along it, and in the Middle Ages a strong fort guarded it, a frequent site of battles between Bulgarians and Byzantines. The importance of the pass was mirrored in its name. Zhelezni Vrata and Demir Kapiya mean Iron Gates in Bulgarian and Turkish resepctively. The modern-day name of the pass, Vratnik, was adopted in 1942 and just means Gate.

Today the pass is almost deserted, as most drivers prefer to avoid the narrow potholed road which zigzags through a thick forest. Even in summer, when you stop at the highest part of the pass to look for the Kamchiya's source, you will most probably find the place empty.
Actually, "empty" means "empty of tourists." The forest around the spring is the temporary home of of some Gypsies families dealing with lumberjacking and mushroom-picking.Their ragged tents made of old blankets and sheets of nylon are all over the place, as are the heaps of household garbage.

The beginnings of a 200-kilometre Luda Kamchiya river

The scenery becomes almost surreal when mist descends, drenching the forest in white and leaving only the dark trunks of the closest trees visible.

The Luda Kamchiya's spring is east of the road, in a depression hidden by tall trees. Spectacular it is not, as it is fed into a water fountain. The water fountain inscription, however, is grandiose: "To those fallen for freedom. Glorify their sacred feat you, unendingly flowing Kamchiya."

There is some justification for this. Only 2 kilometres east of the spring is Aglikina Polyana, or Aglika's Meadow, where the Bulgarian hayduti, or 19th Century rebels, used to meet. They lived in the mountains as far away from the Ottoman authorities as possible, except for when they attacked and robbed Ottoman convoys at the pass.

Aglikina Polyana is heavily represented in Bulgarian heroic folklore, has a protected area status and hosts a regular folklore meeting.

You can visit Aglikina Polyana from here, but in any case be sure to kneel at the water fountain which is the source of the Luda Kamchiya and take a drink. It is not that often that you can drink the cool, clear waters of a river at its source.