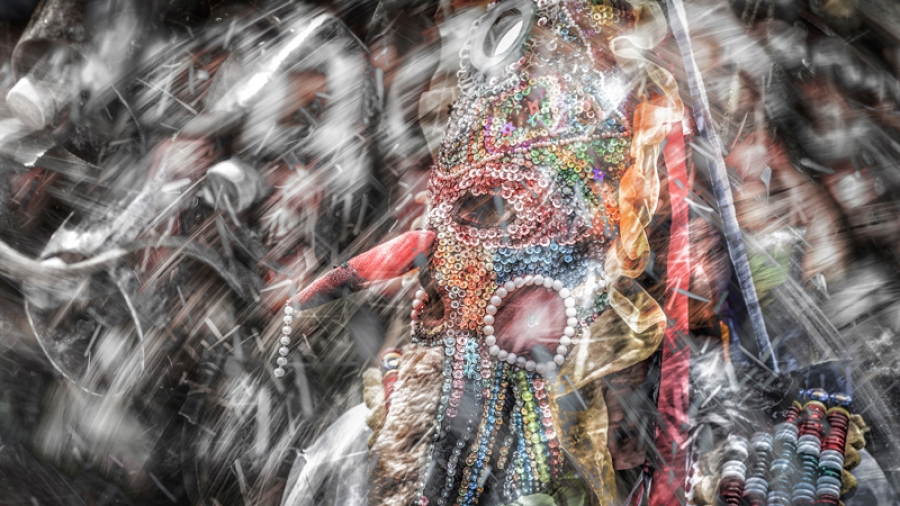 Situated in the plains in southeastern Bulgaria Yambol is generally off any tourist map. Few Bulgarians would visit unless they have grandparents or friends living in one of the most depressed post-Communist cities in the country. Except for a weekend in late February/early May when the town host Kukerlandia, when a major festival of mummers attracts national and, increasingly, international interest and participation.

Many Bulgarians believe that their tradition of putting on scary masks and dancing to celebrate the "death" of old year, the arrival of spring and the revival of nature is unique in the world. Like so many beliefs concerning "uniqueness" in Bulgaria, it is not. Rites and traditions similar to those of Bulgarian kukeri, or mummers, exist all over Europe, including Ireland, Italy, Spain and Greece, and across Asia all the way to Japan. These traditions share another similarity: they were an integral part of life in farming communities, but now they struggle to survive in a world defined by industrialisation, urbanisation and globalisation. Obviously, they thrive in a culture of oversharing, social media and mass tourism that favours spectacle and likes-and-shares over substance and understanding.

Before the forced industrialisation and urbanisation that followed the Communist coup of 1944 in Bulgaria, kukeri were ubiquitous in villages across the country. In different regions mummers would dance on different days in the period between Christmas and the beginning of Lent. They would also wear different costumes: fur, animal hides and birds' wings adorned traditional kukeri in western Bulgaria while colourful rags and sequins were preferred in the east. Kukeri from all over the Bulgarian lands had in common their scary appearance, the noise of the cow- and sheep-bells hung from their belts and the obscene antics they performed in front of the amused, and probably slightly terrified, local communities. The days of the kukeri dances were a time when ordinary husbands and farmers transformed into hairy monsters that would roam the streets, chase women and touch them with long phallic staffs painted in red, and perform frenzied pantomimes, including a mock wedding and the birth of a baby made of rags.

This authentic ritual not only provided an outlet for human passions constrained for most of the year by the rigid rules of traditional society, but kukeri were also a latterday incarnation of the ancient Thracian priests who performed rituals dedicated to the rebirth of nature in late winter and early spring. Their behaviour might seem obscene to modern eyes, but it is fraught with symbolism. The phallic staffs, the mock wedding and everything else symbolised unbridled manly power inseminating Mother Nature and securing the arrival of the next spring, the next harvest, and the next generation. That is why only men were allowed to be kukeri, and becoming a mummer was an initiation into manhood.

Under Communism, this ancient belief was turned into a spectacle far removed from its original meaning, and it was not only urbanisation and the depopulation of villages that stifled the genuine kukeri tradition. Communist ideology, which viewed everything old as redundant, reactionary and pointless, discouraged mummer dances and other folk rites in villages. Then, something even more twisted followed – by the 1960s the government was eager to invent a new Bulgarian identity that was both nationalist and Communist. Kukeri, along with folk music, traditional costumes and crafts, were reinvented. Mummers became a modern festival, a spectacle for the eye emptied of its ancient spirit. The obscene antics disappeared and the dances were choreographed and sterilised. Kukeri were reduced to funny figures wearing impressive masks. They were promoted as bringers of health and good fortune to the guileless public, which was itself alienated from its own rural past and traditions.

Today, Communism may be out, but nationalism is very much a part of the Bulgarian identity. Kukeri have changed even further. Masked dancers can be seen everywhere and anytime when "Bulgarian identity" needs to be promoted. You can even hire a kukeri troupe to dance at your daughter's wedding. Women and children often put on masks, something that three generations ago would have been considered sacrilegious – not because of patriarchal oppression but because it is against the very essence of the rite.

Some communities managed to preserve the ritual as close as possible to its original content and form, like some of the villages around Yambol. That is why today this city in eastern Bulgaria is the centre of a major kukeri festival.

Kukerlandia appeared 20 years ago, in 2000. Held at the end of February and the beginning of March, it has gathered kukeri troupes from across the region and all of Bulgaria, plus some foreign guests. Kukerlandia completely transforms Yambol. Its streets reverberate with the cries and bells of dancing performers, there are concerts and cultural events, and a mummer-themed photo competition attracts participants from Bulgaria and abroad.

Bulgaria's English Magazine, Vagabond has been a co-sponsor of the Kukerlandia exhibition and has handed out its Vagabond prize, introducing its winners to our public since the competition's inception in the 2000s. If you are ready for some kukeri madness, visit Kukerlandia from 27 February-1 March.