THE PLATE OF DISCORD

Bulgarians overestimate their cultural heritage, except when it comes to protecting it 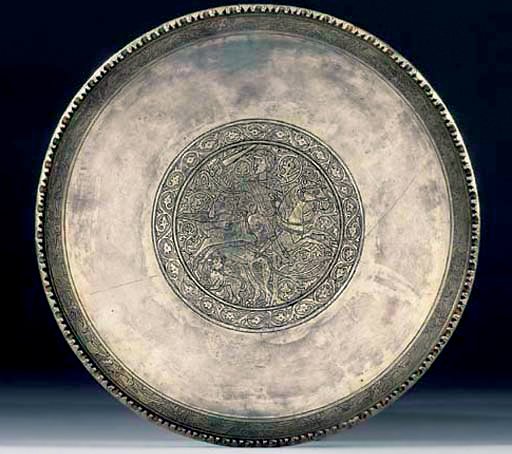 At the beginning of October, another spanner was thrown into the works in Bulgarian-British relations, already fraught with questions over immigration and British labour market policy. It came in the form of a rare 12th Century Byzantine plate. The ancient treasure was a source of consternation both for Christie's and for Bulgarians, who accused the auction house of trying to sell an artefact that had allegedly been smuggled out of the country.

The explanation given by Bozhidar Dimitrov, head of Bulgaria's National Museum of History, that treasure hunter Nayden Blangev had unearthed the plate near the southern Bulgarian town of Pazardzhik in 1999, was accepted by both the authorities and the general public. The description in Christie's catalogue, which states that the plate was part of a larger set discovered in 1903 and acquired by the Stanford Place Collection of Antiquities in 1997 or 1998, was met with doubt.

But collective national pride had another bitter pill to swallow. British magistrates overruled the official claims of the Supreme Court of Cassation sent to the British police, Interpol and the auction house demanding that the sale be suspended until the origin of the dish was clarified. The letter from Minister of Culture Stefan Danailov also went unheeded.

The Bulgarians, being part of a nation with a rich and varied historical heritage, accepted the events as yet another example of the looting of cultural monuments from their lands. Nobody can deny that this has often been the case in the past. In 1837, for instance, King Ivan Alexander's richly-illustrated gospel of 1355 was given to Lord Robert Curzon by the abbot of St Paul's Monastery in Mount Athos. Later, it became part of the collection at the British Museum and is now known in Bulgaria as the London Gospel.

More often than not, however, it is Bulgarians who are to blame for spiriting cultural treasures out of the country. Treasure hunting is a flourishing business and has already bulldozed whole Roman cities like Ratiaria, near the present-day village of Archar. It has stripped Roman villas, like the one near Ivaylovgrad, of their marbles, and left monstrous scars in Thracian burial mounds. Bulgarian treasure hunters have their own web sites where they exchange information and advertise metal detectors. They keep a careful eye on what archaeologists are doing and feel they can act with impunity, because only 80 law suits have been filed against treasure hunters since 1995. Of these, only five percent were for illegal exports. Reputedly, the annual earnings from the export of cultural treasures are close to those from drug dealing. Such activities are impossible without "high level" protection. Communist-era rumours that top-ranking officials close to Lyudmila Zhivkova traded Thracian gold treasures abroad, substituting them with replicas at home, may not be completely true, but they are indicative.

After all, it is a fact that one of the richest collections of archaeological artefacts in Bulgaria belongs to Dimitar Ivanov, the last head of the notorious Section 6 of Department 6 of former State Security. Fellow antique collector Georgi Filchev is the brother of ex-chief prosecutor Ivan Filchev. That Bulgarians want to keep their archaeological treasures in Bulgaria is quite logical and understandable.

This is what other countries, like Greece, Turkey and Egypt want too. But in the uproar ("They are selling our plate!"), we overlooked the simple fact that Bulgarian artefacts abroad can't compare with the likes of the friezes of the Parthenon in the British Museum, those of the Pergamon Altar in the Pergamon Museum in Berlin, or Queen Nefertiti's head in Berlin's Egyptian Museum. The noteworthy exceptions, such as the world's first processed gold or the Vulchitrun Treasure, leave the country only for international exhibitions.

Some may speculate that there may have been more valuable finds which have crossed the border and are now well hidden in private collections abroad. If this is the case, we can only hope that some day these hypothetical cultural and historical treasures will be brought to light. Then the National Museum of History or the government could buy them back, if they had been exported before the law for the protection of cultural monuments was enacted, or claim them back in court if they were removed from the country illegally.

If something of the sort happens, we'd rather have the artefacts go to the British Museum or the Metropolitan. They would be safe there, available for scientific research and exhibited for people to see. Importantly, officials would not ban photography, as is notoriously the case in the institution Bozhidar Dimitrov runs. Every nation should be proud if its heritage goes to such an institution: this is proof of its worth. As far as the plate is concerned, Christie's could not sell it. Nobody was prepared to offer the sum they were asking for it.

Bozhidar Dimitrov told a popular Bulgarian talk show: "The Bulgarians have always been very cultured and civilised... whenever someone's reached out to their plates, they've chopped their little hands and sometimes their little heads off." Among Professor Dimitrov's views is that the Macedonians are in fact Bulgarians.