TOTALLY OFF THE RECORD

When Irish fans come to Sofia in June 2009 for the World Cup qualifier between Bulgaria and the Republic of Ireland, they may be reminded of a little known piece of distant sporting history. For it was against Bulgaria, in 1924, that newly independent Ireland played its first ever international football match. In 1922, after years of conflict between the British Empire and Irish rebels demanding an independent Irish republic, the Anglo-Irish peace treaty was signed. This divided the island into the independent Irish Free State and the smaller Northern Ireland. The divisions also reverberated in the sporting world.

In 1921, northern club Glenavon drew with Shelbourne in the Irish Cup final in Belfast, but refused to travel south to Dublin for the replay, pleading security concerns. The Belfast-based Irish Football Association, which governed soccer throughout the island of Ireland, supported Glenavon. The southern clubs responded by forming their own association, initially called the Football Association of Ireland (FAI). In 1923, this FAI applied to FIFA for recognition as the organising body for football in the Irish Free State. However, to gain entry, it had to change its name to the Football Association of the Irish Free State.

So by 1924, the FAIFS was running soccer in the infant Free State. In those days football had no European Championships or World Cup tournament. The Olympic Games was the premier international sporting event and Paris 1924 was in sight. These were to be the games immortalised in the film Chariots of Fire. The overwhelming importance of the Olympics can be seen from the fact that in 1923, when FIFA tried to welcome the Free State team with a programme of football internationals, the Irish declined.

They had no time for the FIFA-organised matches, saying that they were focused on getting their team ready for Paris! Accordingly, preparations for Paris began. A week before departing Dublin, the FAIFS Ireland team played a friendly against local club Shelbourne at a sunny Dalymount Park. The national team included players from Shamrock Rovers, Bohemians, Athlone, St James Gate and from the lesser known Brooklyn.

The national selection won three-two, but the Irish Independent newspaper noted that “more strenuous efforts….will be required when they meet the foreigners”. The trip to Paris would be expensive and money was short in the FAIFS, which had to resort to publishing begging letters in the newspapers asking the public to make donations to fund the trip. On Saturday, 24 May, the squad and several officials left for Paris.

Their early arrival increased the significance of their presence to the newly independent state. In those days, the Olympic Games, unlike now, were contested over several months. So, even after the Games had actually started, many Irish athletes hoping to make it to Paris were still going through the Olympic selection trials back home. (For example, Croke Park in Dublin was still to host a set of Olympic trials as late as 7 June).

This last-minute approach to selection meant the football squad would have the dual distinction of not only playing independent Ireland's first international match, but also of being its first participants in the Olympics Games.

The arrival of the Irish team was loudly welcomed by the French media, the more so as no team from Britain, the home of football, had come. (The French welcome address lamented that the rules on amateur participation could not have been written loosely enough to let the England team in). On 26 May, the group placed a wreath inscribed in French and Gaelic on the grave of the Unknown Warrior in Paris, in a ceremony which newspapers reported was attended by French and British diplomats. (No mention of Irish diplomats!) 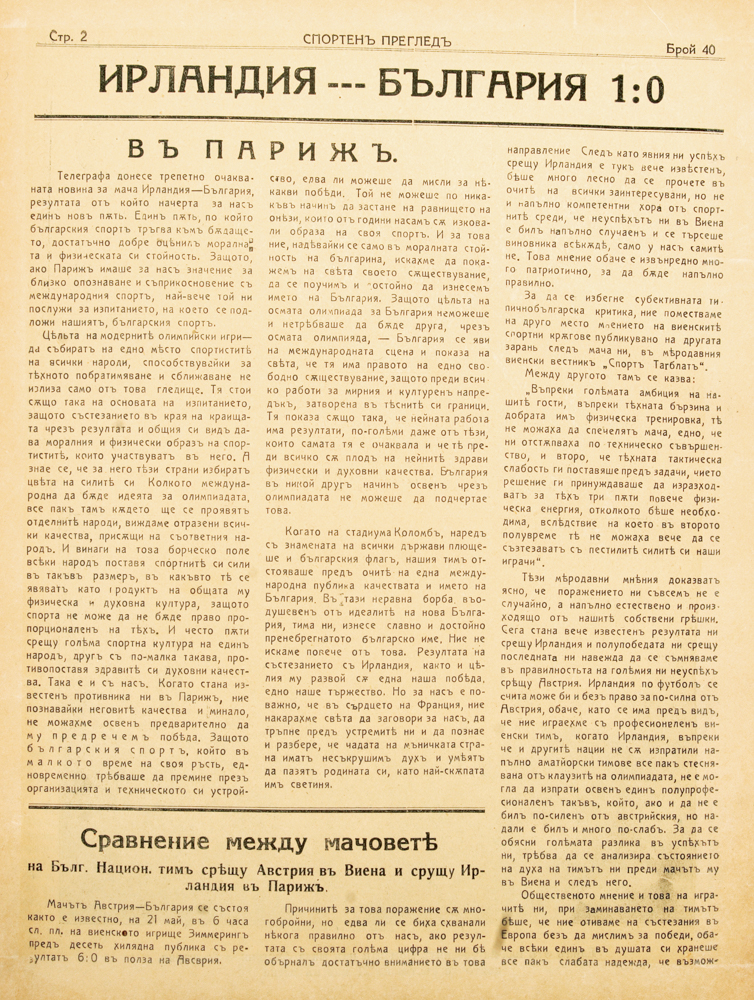 Having been given a bye in the opening round, Ireland was drawn against Bulgaria in the second. For Bulgaria, which had finished up with the losers in the First World War, the game was also of immense national importance in resuming its place in the family of nations. The Bulgarian newspapers were quite anxious; they reckoned the Irish players among the best in Europe. The newspaper Sporten Pregled, or Sports Review, printed a match photo of the Irish team – and fretted that their own selection would be no match.On Wednesday, 28 May 1924, the teams from Ireland and Bulgaria lined out at Stade Colombe in Paris.

Both received a rousing welcome, and the Irish fans in the ground sang Gaelic songs. The first half saw Bulgaria, much to Irish surprise, play beyond expectations to look the better team. But Ireland, with its backbone of five Athlone Town players, revived in the second half. Finally, after some close shaves, the Boys in Green fell behind. It was a disputed goal, which observers considered clearly offside, but one-nil it remained until the end.

Disappointed Irish newspapers judged the match a poor one and mused that with the next game against either Sweden or Belgium, the first round winners would stand little chance against so-called crack teams .The sports press in the winning country trumpeted a “glorious victory”. The loser's newspapers also held their heads high and spoke proudly of the vindication of their little country's “strong physical and spiritual traits…….we made the world talk about us, shiver before our determination, get to know us, and understand that the children of this small country have an unconquerable spirit and can guard their homeland as the most sacred relic”. So much for it only being a game.

As it happens, the goal-scorer in this defeat for the Boys in Green was Mr Paddy Duncan of the St James Gate club. No, it was not an own goal. For in this, their first ever international match, the Irish team wore blue. It was the Bulgarians who wore green.Unfortunately, this glorious beginning in international football was not sustained. Ireland lost the next game to – guess who? – the Netherlands, the start of a long and ongoing history of losing out to the Dutch when it really matters.

The Bulgaria match, funnily enough, though still reckoned a full international by Bulgaria and FIFA, was erased from Irish international records sometime in the 1960s when the FAI reclassified Ireland's early games. Thus, the FAI records a (surprise) three-nil defeat away to Italy in 1926 as our first international (yes, Irish newspapers then were surprised that Ireland could have lost to Italy. How times change). It was to be many years before Bulgaria again played a major part in Irish soccer history, and it did so accidentally in 1987, losing to Scotland and Gary Mackay's goal, thus kick-starting the Charlton years.

So, the next time you're in one of Bulgaria's Irish pubs, buy a round for the locals. As history shows, they've done a lot over the years for the “ Boys in Green”.