Dragon houses: until not that long ago, this was what Bulgarians called the squat, sturdy dolmens littering the low ridges of the Strandzha and Sakar mountains. 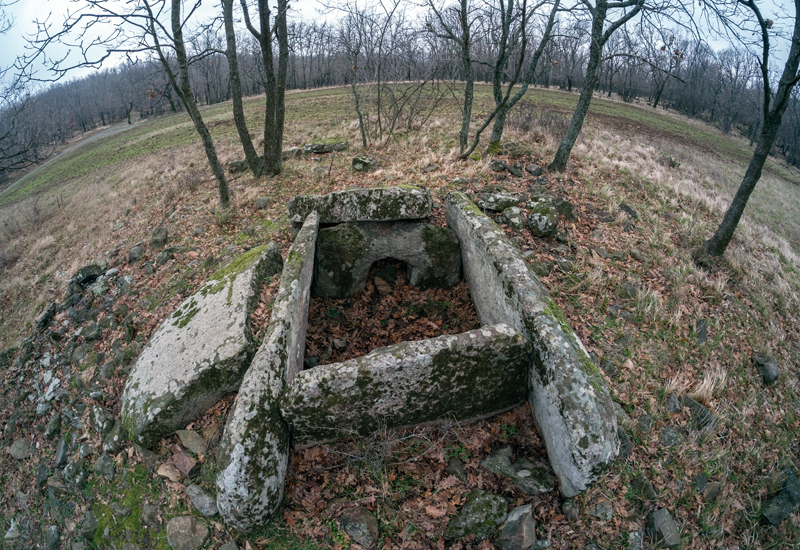 This dolmen is called Zmeyova Kashta, or Dragon's House, and is near the Begliktash Thracian rock sanctuary near Primorsko, in the Strandzha

Made of slabs of rock, which formed the walls and ceilings, dolmens are Bulgaria's most numerous megaliths. They resemble the dolmens built in Western Europe, the Caucasus and North Africa in 4000-2000 BC, but they are significantly newer. The first dolmens appeared in Bulgaria in the 12-11th centuries BC, their construction peaked in the 8-7th centuries BC and ended in the 6th-5th centuries BC.

Until recently in Bulgaria there were about 600 well preserved dolmens, but today only about 100 of them survive in relatively good condition. The others were destroyed in the 19-20th centuries by treasure hunters and local villagers, for whom these ancient monuments were just an obstruction to ploughing bigger plots of land or a useful source of quality building materials.

As a rule, the dolmens stand on the crests and slopes of mountain ridges commanding wide views. Some of them are single, others form groups. The majority have only one burial chamber, although dolmens with two chambers are not uncommon.

These chambers are claustrophobically small, narrow and low. Some dolmens have short entrance corridors, which are even lower than the chambers, and can only be entered by crawling through the narrow passage. They always face south – a clear connection to the movement of the sun, which for the Thracians represented the Great God.

The dolmens you see today are exposed to the elements, but their creators did not intend them to be this way. The structures were almost or entirely covered by mounds of earth with diameters reaching up to 25 metres. 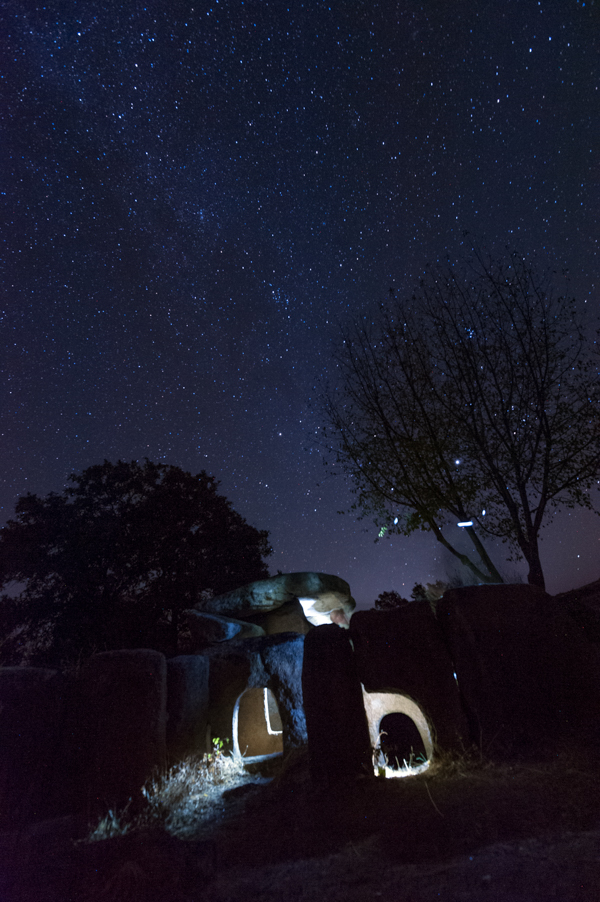 As a general rule, the dolmens from the Sakar and the Strandzha are larger and have more elaborate layouts and façades than those in the Rhodope. The most impressive and well-preserved are two attached dolmens near Hlyabovo village, in the Sakar, the triple dolmen near Kirovo in the Strandzha and the only dolmen with decoration ever found in Bulgaria, near Golyam Dervent village, also in the Strandzha. Its façade is adorned with reliefs of spirals, meanders and a double axe, the symbol of royal power in ancient Thrace. Only one individual was buried in the Golyam Dervent dolmen, indicating his important status.

Other interesting dolmens are situated near Sakartsi and Balgarska Polyana villages, in the Sakar, and the villages of Belevren, Granichar, Evrenozovo and Zabernovo, in the Strandzha.

Through the centuries, generations of treasure hunters have emptied countless dolmens of their contents, leaving archaeologists with few traces of what was inside – some bones, pottery shards, the occasional piece of jewellery. The fact that the remains of different individuals are often found in the same dolmen points to the conclusion that dolmens were family tombs used by several generations.

Centuries after the builders of the dolmens were dead and forgotten, the megaliths continue to impress the living. When Christianity replaced the old gods, chapels were built on or close to some of the old dolmens. In local folklore, the surviving megaliths were believed to be the homes of dragons, those mythical creatures who, if given respect by the locals, would take care of the village and the crops.

Today, most of Bulgaria's dolmens are forgotten, hidden, on the verge of disappearing. Near the village of Hlyabovo, in the Sakar mountains in Bulgaria's southeast, however, there is a spectacular dolmen that is also easily accessible.

You will find it in a ravine in the Nachovi Chairi area, southeast of the road between Hlyabovo and Balgarska Polyana, at the end of a signposted tourist path.

When it was discovered, in the 1970s, the dolmen was under a 10-metre mound. It has a layout and structure unmatched so far: two attached dolmens with two chambers each, and a monumental façade. The stones covering them are still in situ. The intact human remains found in one of the chambers were a breakthrough, the first time for a dolmen in Bulgaria. The finds pointed to the 9th-8th centuries BC as the date of construction.

A map in the centre of Hlyabovo shows that there are more dolmens around, if you are keen on walking, exploring, asking locals for directions and are not afraid of getting lost. A two-chamber dolmen without covering slabs, in the Gaydarova Peshtera area, is clearly visible from Nachovi Chairi. To the south there are several dolmens scattered around a small artificial dam. Most are barely visible among the undergrowth and are in poor condition, but the dolmens in Slavova Koriya, Byalata Treva and Avdzhika localities are worth the effort. Two more relatively well preserved dolmens are to be found further south, near the village of Sakartsi. 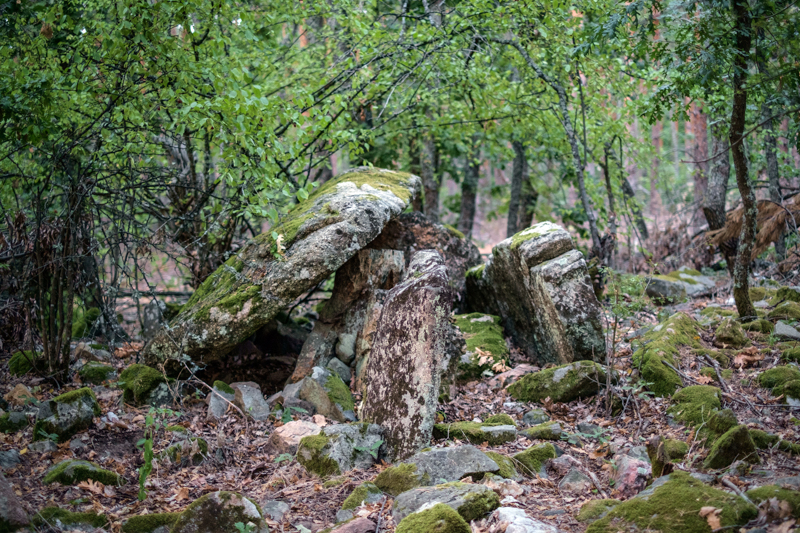 One of the two dolmens in the vicinity of Belevren village, in the Strandzha. Unlike many other dolmens that were destroyed by treasure hunters and villagers, these were properly excavated by archaeologists 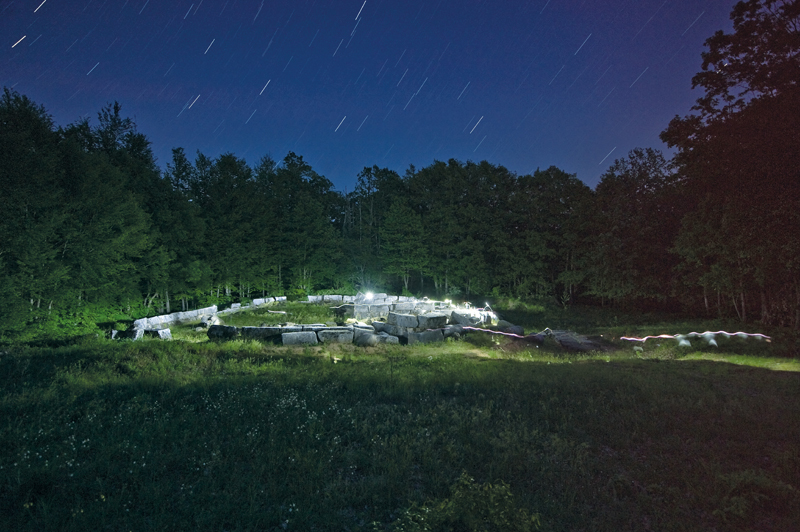 In the Roman era, a tomb with a cupola, corridor and pediment was built over the remains of an older dolmen, in the Mishkova Niva area, near Malko Tarnovo