Whether it's true or not, Bulgarians frequently describe themselves as a nation with a pessimistic streak. Still, as long as we're pulling out cultural stereotypes, what about Americans? Incorrigible optimists, some may say, who believe that anything is possible with hard work and determination.

The spirit of American optimism is evident in the mission of the United States Agency for International Development, or USAID, the key agency tasked with delivering assistance funded by American taxpayers to developing countries around the world. The agency was established by no less an idealist than President John F. Kennedy in 1961. When he assumed office, Kennedy urged the reform of foreign assistance in order to separate military and non-military aid and to uphold America's moral responsibility as a wealthy nation. "A program of assistance to the underdeveloped nations must continue because the nation's interest and the cause of political freedom require it," he proclaimed.

Eighteen years ago, seizing the opportunity created by the collapse of the Soviet Union, Americans with their can-do attitude set about the task of helping Central and Eastern Europe recover from decades of authoritarian rule and inefficient, centrally planned economies.

Developmental assistance from the United States began soon after the Berlin Wall came down. The American Congress passed the Support for East European Democracy (SEED) Act in 1989, aiming to promote democratic and free market transitions in the former Communist countries of Central and Eastern Europe.

USAID began working in Bulgaria in 1990 and established a physical presence in 1991. Over the next 17 years, Bulgaria received more than $600 million in development assistance from the American government. The United States was Bulgaria's largest donor during the country's
transformation.

The approach of USAID in all the countries it operates in is to provide direct assistance to local entities rather than large credits or grants to governments. Assistance is frequently coined "technical assistance" or "capacity building" when foreign or local experts provide knowledge and tools to local organisations and institutions to develop and implement reforms. USAID in Bulgaria worked closely with Bulgarian NGOs, businesses, and reform-minded government officials, as well as with other international donors, to design programs targeted at key reform issues.

As anyone who lived through the difficult years of Bulgaria's transition can attest, the country faced a staggering array of problems in almost every aspect of social and economic life. In 1989, Bulgaria was emerging from four decades of repressive government dominated by a single
political party. NGOs and a free press were basically nonexistent. Early USAID support in Bulgaria focused on these building blocks of democracy by helping to develop a pluralistic political party system, strong civil society, and independent media.

Helping Bulgaria's locally elected governments become more responsive to the needs of their citizens was another priority of USAID democracy promotion work. USAID facilitated visits by American local government officials who were matched with counterparts in Bulgarian cities. Bulgarian mayors also travelled to the United States and the experience was often eye-opening. Bulgarian officials were exposed to new ideas, which their American colleagues helped them put into practice back home. One mayor of Varna was inspired to install city pavements with wheelchair-accessible ramps after seeing them in the United States.

One-Stop-Shop information and service centres began multiplying in Bulgarian cities after this idea was adapted from the American example. Today, more than 140 of these centres allow Bulgarians to obtain documents more easily and to receive better service from local authorities.
Revitalising an economy crippled by years of dependence on inefficient collective farms and state-run enterprises was another major challenge facing Bulgaria during "the changes".

Almost half of the total USAID funding in Bulgaria was aimed at helping the country to develop its free-market economy through privatisation of state-owned firms, reform of economic policies, and stimulating private entrepreneurship. After the Bulgarian banking system collapsed in 1996, USAID stepped in to help strengthen financial institutions. USAID was also involved in the reform of Bulgaria's pension system and restructuring the outmoded energy sector.

USAID micro-lending programs made more than 53,000 loans worth $68 million to microenterprises, which often have difficulty obtaining traditional bank loans. One entrepreneur in Pleven borrowed and paid back more than $75,000 in loans to hire 80 workers for her thriving sewing business. A Gypsy businessman in a remote village near Sliven used micro-loans to start a small food store and then to buy a company vehicle as his business expanded. The Bulgarian American Enterprise Fund (BAEF), the product of a $58 million USAID investment,
was a major lender to small and medium sized enterprises, including such successful businesses as the Happy Food chain of restaurants. BAEF later created the Bulgarian American Credit Bank, which gave some of the country's first mortgage loans. 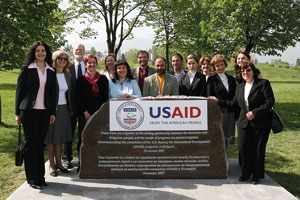 They also addressed remaining obstacles to Bulgaria's EU membership: rule of law and anticorruption. The National Institute of Justice, which has trained thousands of Bulgarian judges and court clerks, was started with USAID assistance and is now considered a model
institution in the region. A weekly investigative reporting show on Nova TV, Na Chisto, was the first of its kind in Bulgaria to shed light on sensitive corruption issues.

Assistance from the United States was instrumental in the establishment of Bulgaria's network of protected areas and national parks as a means of protecting the country's rich biodiversity. Unfortunately, this was one area where much more could have been done with sustained government commitment. "As always, there are initiatives that didn't succeed as much as we would have liked or that were not sustained afterwards," notes USAID Bulgaria mission director Michael Fritz. Health reform and agriculture were two of the areas where USAID efforts met with limited success.

"Even after USAID no longer has a physical presence in Bulgaria, the local organisations and institutions we helped to establish will continue to function," Fritz says. "Thousands of Bulgarians who received USAID training are part of the human legacy and will continue to put their skills and expertise to use for Bulgaria's future." USAID has established two funding mechanisms to bolster continued progress: the America for Bulgaria Foundation and the Bulgaria Fund. The foundation will provide grants to business groups and NGOs, while the Bulgaria Fund is targeted at NGOs and former USAID partner organisations.

A primary US investment in Bulgaria's future generations is the American University in Bulgaria (AUBG), a four-year liberal arts undergraduate institution in Blagoevgrad with the mission of educating future leaders. Other USAID initiatives aimed at Bulgaria's youth
include a network of university career counselling centres and promotion of internship programs. There is also support for Junior Achievement, the worldwide youth education organisation, to develop business skills in high school students.

Last year an educational testing program invented by two enterprising Junior Achievement students in Veliko Tarnovo launched on the Bulgarian market. The students turned down an offer from one of Bulgaria's major software companies to sell their copyright.

The USAID Mission to Bulgaria will close in September 2008, ending an era in Bulgarian history. The USAID missions in Croatia and Romania have also closed their doors. The next missions likely to close are also in the western Balkans, but no definite dates have been set.

Meanwhile, USAID will continue to work in developing countries around the world.