In the Western Rhodope, the picturesque is often just a step away from the sublime and you will often have the feeling that you have ventured into the realm of some powerful and not always benevolent spirits. The landscape was created in the aeons when some of the Earth's oldest rocks were being formed, long before the emergence of complex organisms, between 2.5 billion and 540 million years ago. With time, these morphed and shifted shape under the immense pressure of tectonic movements, volcanic explosions, the advance and regress of prehistoric seas, and, finally, the subtle but never ending power of rain, sun, wind and rivers carving the ancient marbles into the geological phenomena that we see today.

Trigrad and Yagodina, two villages by the border with Greece, are where the most impressive Western Rhodope geological formations are located. The winding roads in the area take you to white water gushing between steep rocks and gigantic ferns and burdock. Twisted trees and lush geraniums hang from crevices. The gorges are so narrow that direct sunlight is a rarity. It looks like another world, the real-life version of a very grim Grimm tale.

The menacing beauty of the area has probably impressed humans since they settled there, supposedly around the 4th millennium BC. Making up legends and myths to explain the wild nature comes naturally and continues to this day, to attract more tourists. The best known is the tale that Orpheus descended into hell through the aptly named Devil's Throat cave.

The entrance of Devil’s Throat Cave...

The name of the Devil's Throat is also recent, inspired by the supposed resemblance of the cave's opening to Satan's mouth. Its original name, Klokotnitsa, was onomatopoetic, reflecting the rumble of the Trigradska river that flows into the cave and then falls into its abyss.

... and its underground waterfall

The Devil's Throat is not a cave that you visit if you are after stalactites and stalagmites. You go there to experience the feeling of being deep under the earth's surface, where the 42-metre underground waterfall booms in a huge cavern and fills it with thunder and thrill. When it hits hard ground, Trigradska river disappears into another hole, to resurface miles away. According to another local myth, everything that has fallen in its waters is doomed to disappear forever in its mysterious, infernal labyrinth – from animals and humans to whole timber logs. A humble plaque by the cave entrance, dedicated to two spelunkers who drowned there, shows that this myth is not without justification. 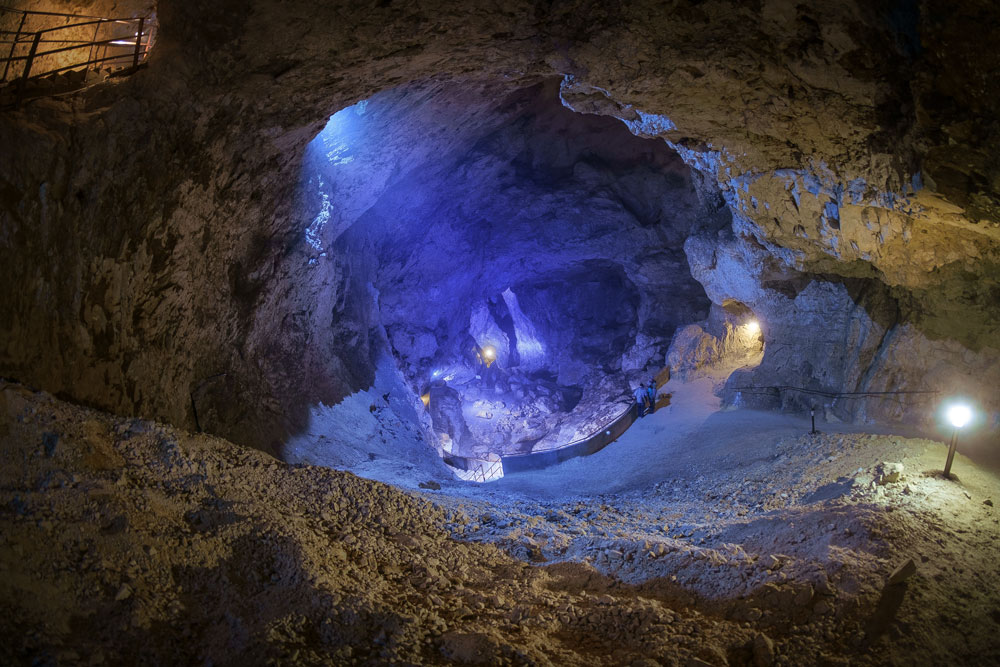 Visiting the Devil's Throat is not for the faint hearted. You enter the cave through an artificial opening, but your only way out is via a narrow metal staircase that climbs besides the waterfall.

If the Devil's Throat is thrilling, Haramiyska Cave is in a league of its own. Located on the opposite bank of the gorge, it is accessible only with caving and climbing equipment and with special guides. To reach the entrance, you have to climb a 20-metre rock wall, and once inside, you need to sneak through some narrow cave tunnels. Then you descend into the dark abyss of a 43-metre high cave hall illuminated solely by an opening far, far above. Prehistoric people were aware of the cave, and used to camp by its entrance.

Located in the gorge of Buinovska River, the Yagodinska Cave is much tamer. It is all you need if you crave stalagmites and stalactites, and is advertised as Bulgaria's most beautiful cave. It is 10 kms long and spreads over three levels, but visitors are taken on a guided tour that covers only 1,100 metres on the lowest level. The path leads you by stalagmites big and small, rock curtains and cave pearls. Here and there the rock is covered in spots that spelunkers have dubbed leopard skin. The most spectacular rocks have their own, rather imaginative, names like Snow White and the Seven Dwarfs, the Virgin Mary and Baby Jesus, Father Christmas and so on and so forth. The cave is also a place for some eccentric traditions, like celebrating New Year inside (the spelunkers leave the festive tree for the whole year in the cave) and getting married.

With its caves and narrow gorges, this part of the Western Rhodope is all about staying underground and far from the direct sunlight. But there are places where you can get a higher vantage point.

The Eagle's Eye viewing platform, near Yagodina, requires litle effort and some money – to visit it, you have to rent a 4WD and a guide from the village. They will take you to the cliff edge from whence you can watch the vista of the Rhodope plus parts of the Pirin and the Rila.